ASCII art wasn't always the hip-hop coolness of Remorse and kts!; the ASCII standard got underway in the '60s and computer culture had a lot of growing yet to do before conditions would be right for cool kids to emulate graffiti typography styles. (For instance, the hip-hop style of graffiti would itself require a couple of decades to simmer before it was ready for prime time, let alone its digital cloning.) For the first couple of decades, it got a free ride on existing bodies of work of TTY art, and eventually ASCII found wide credence as a helpful shorthand to draw (in public domain circles) emoticons and stickmen (and quite a bit more in the underground) on UseNet newsgroups and on BBSes hooked up on eg. FidoNet echomail. Joan G. Stark was the master of this idiom; her acolytes included the likes of Laura D. Brown whose work you got a chance to enjoy in the "recent" Mistigris artpack MIST1015 I was fortunate enough to have a chance to bring into the world last October. Back in the day, we of Mistigris were even cranking it out reflexively as a matter of course in the KitschNet BBS echomail message bases, and from there to the recurring "ASCII Wars" column in our Kithe e-mags. But these PD doodles were just warts on the nose of the entire command-line interface ecosystem; underground ANSI art escaped being pulled down with the sinking ship of MS-DOS because it was judged as having unique aesthetic merits external to its technological context, but ASCII stickmen only lingered on for a time in the texty refuge of the newsgroups for a time, eventually passing from relevance along with their crash pad. (Much as how dolphins, billfish and ichthyosaurs ended up assuming similar shapes in the same niche, despite being mammals, fish and reptiles, similar textmode art styles emerged in other contexts of graphical limitations -- notably Shift_JIS art, upon which I'll have to elaborate in a later post.) By the time we'd blown past Y2K, ASCII stickmen were basically on their last leg-slashes, in a situation to be observed in the wild for the last time.

Now, nostalgia is a strange beast. As you age, you look back and remember your experiences... but frequently fail to appreciate that your situation earlier in life wasn't universal or even necessarily typical. Not every kid in your class grew up with a computer in their house, wow! Of those who did, not every computer was equipped with a modem! Of those which were, not every modem was used to call up BBSes (well, someone was dialing into the online service providers like CompuServe, GEnie, Delphi etc.) And finally, of those kids in homes with computers and modems who called up BBSes... most of them never entered into the computer underground. (A little sneakernet, sure, but that was soft-core.) Sure, some of them probably dabbled in it briefly, or attempted to gain access but were turned aside when they couldn't explain what ACiD stood for, but to most modemmers, public domain bulletin boards was it (bbslist.textfiles.com has 2285 listings, more or less, for public BBSes in my home area code of the 604), and their computer art culture was the only computer art culture they knew -- ANSI art topping out at 25 lines, drawn (and animated!) in TheDraw, with some ANSI music sequences inserted for kicks. And yes, the stickmen.

My point being, our underground culture of eliteness and artistic excellence was merely the tip of the upside-down iceberg (OK, I confess, this is a dumb metaphor); the vast bulk of it, floating above the surface, settled for mere crude functionality. And however big our underground scenes were internationally -- one thousand, maybe ten thousand individuals -- the public BBS sphere was at least an order of magnitude larger. (Does a hundred thousand people sound too big? It's not that our criminal conspiracy ducked the math -- even earnest attempts to explain it would be met with blank looks from technological laymen.) And so while the nostalgia for underground ANSI art is limited to a golden memory glowing in the brainpans of a few thousand, for far more people their memories of what the '90s looked like online is ASCII stickmen. Which, I think, goes some distance toward explaining why the New Yorker magazine recently ran them in its pages, where ACiD has never (yet) managed to appear.

NO BIG DEAL JUST MY FIRST ILLUSTRATION IN THE @NEWYORKER

OK. That's the background of ancient history. I'm good with that stuff, I can crank it out indefinitely. Now for the connective tissue linking it, impossibly, to current events. This is tougher, because I can't just pull from my experience, nor do I really just want to ... fudge it. But for lack of a response to my interview inquiry, I'll be filling in a few blanks with speculation here. OK, here we go: Jennifer Daniel has personality. Looking at her e-mail address (JenniferDanielAllOneWord@gmail.com) and website URL (http://www.httpcolonforwardslashforwardslashwwwdotjenniferdanieldotcom.com) one might even be tempted to suggest that perhaps she has a little too much personality. (Probably for the best: you don't want to read an interview conducted by two people with too much personality. Speaking of "too much", is that full-figured stickwoman in the Tweet waving her merkin in the breeze?)

Her interest in the ASCII art aesthetic didn't emerge fully formed; there were bread crumbs of precedent:

And yet despite that misfire (maybe it looks better at some hypothetical higher resolution; the text-mode Tumblr has concluded that it will categorize as textmode art all pixel art, given the presence of "pixel"-equivalent characters in most textmode character sets), we must assume that she is of our demographic, that the residual ASCII stickmen stuck in her psyche is a form of genuine PTSD and not a carefully-studied affectation like riding a pennyfarthing bicycle.

Indeed, this stew has been bubbling on the back burner for apparently quite some time:

Over the years, it all eventually amounts to something. Of course, there's not enough demand for stickmen as to build a full-time practice out of it (taking up a sideline as graphics editor at the new York Times in her spare time to make ends meet... just kidding) but it appears that the gradual and insidious infiltration of ASCII art into her portfolio continues apace, burgeoning in slow motion. Just take a look at her business cards! (I know, you think that you are a more serious ASCII artist than she is -- but do you have ASCII art business cards?) 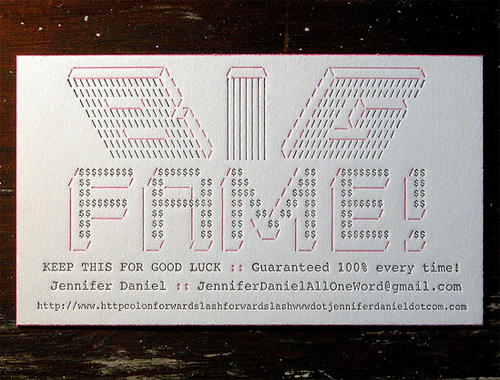 (I, too, would swear that those are Figlet fonts, as I could never imagine a human being choosing to draw those letters in that particular way, but I must say that if they are... I couldn't locate them in the standard list.)

This phase of her interest in textmode themes dates back at least to this profile in 2010 (where someone who I suspect is our ldb points out that the unicorn has been lifted from a classic original design by Daniel "dcau" Au. I won't be too judgemental yet; I borrowed extensively from the public domain for my recent suite of Christmas ANSI art music videos, but I did go to great lengths to attribute the parts appropriately.) But damn, those letterpress-printed ASCII characters leave a deep and gratifying impression you can almost reach through the screen and touch, as though stamped deep into the paper by the world's most satisfying typewriter.

Her texty body of work, not limited to business cards and Tweets, is scattered few and far between; while I'm sure that she has a directory on her hard drive with dozens of ASCII doodles, it is left an an exercise to the reader to gather a "complete collected works" from disparate sources. While not an actual adaptation, this ASCII banana gives me warm & fuzzy memories of Warhol's "Peel Slowly and See" album cover for the Velvet Underground... but while I appreciate her experiments into different "fill" textures here (=, 7, I, N, ? ... all quite at odds from our scene's standard $, 8 and @) that particular conversion would require the use of at least two ANSI colours for full effect. 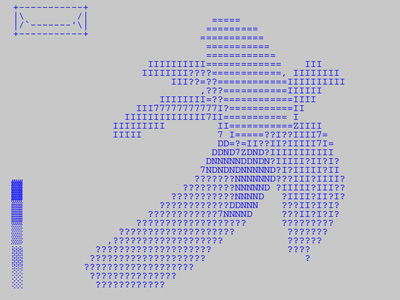 I've heard it said that all visual artists can be divided into two groups: those who can draw people but have trouble drawing animals, and vice versa. Well, stickmen are stickmen -- and here's a dog catching a frisbee: 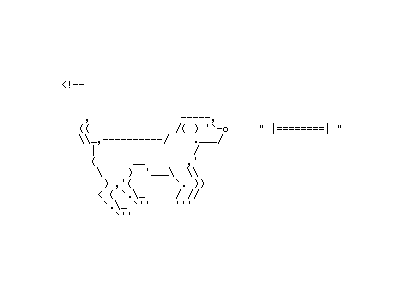 Proving that her muse is species-agnostic, the dog is easily interchangeable with a cat: 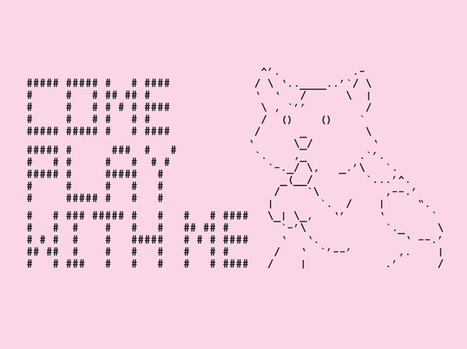 (That font was the Figlet "banner". And while I could swear that this one is from Figlet also, again it doesn't turn up in that listing.) So you can draw any old cat, but can you draw a specific cat? Garfield was an, if not exactly "popular", at least not-unknown early 'toon ANSI subject; can you give us up one of those? 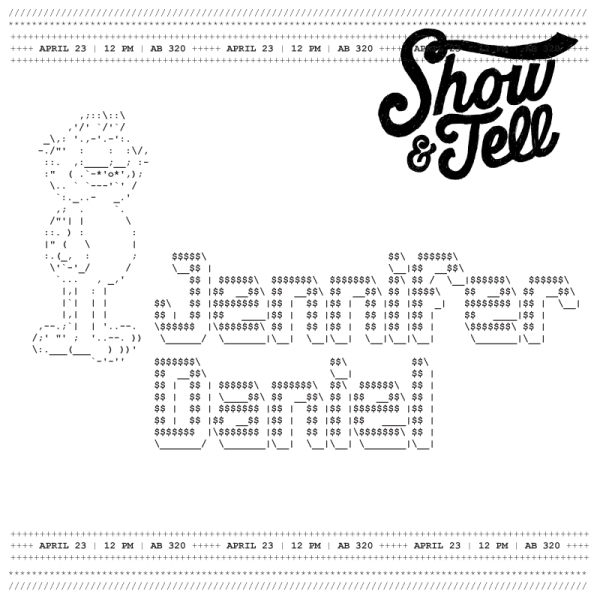 (Hm, if the sig on the one over here is correct, that is lifted without attribution from one "SSt". But who knows, perhaps that was her own sig in some bygone era, it's possible. Maybe she was providing virtuous examples of the art form to spice up promotions for her presentation on the genre of textmode art generally rather than burdening it with her own lacklustre typings? It's, uh, impossible to confirm or deny without a direct line to her.)

Which brings us to her ne plus ultra, the textmode art that very likely reached the widest print audience this year (or, who knows, perhaps ever: circulation has recently been pegged at somewhat over a million copies bought per issue) -- her New Yorker series of New York City scenes, ASCII style, gathered here together in a print you can enjoy in your home collection: 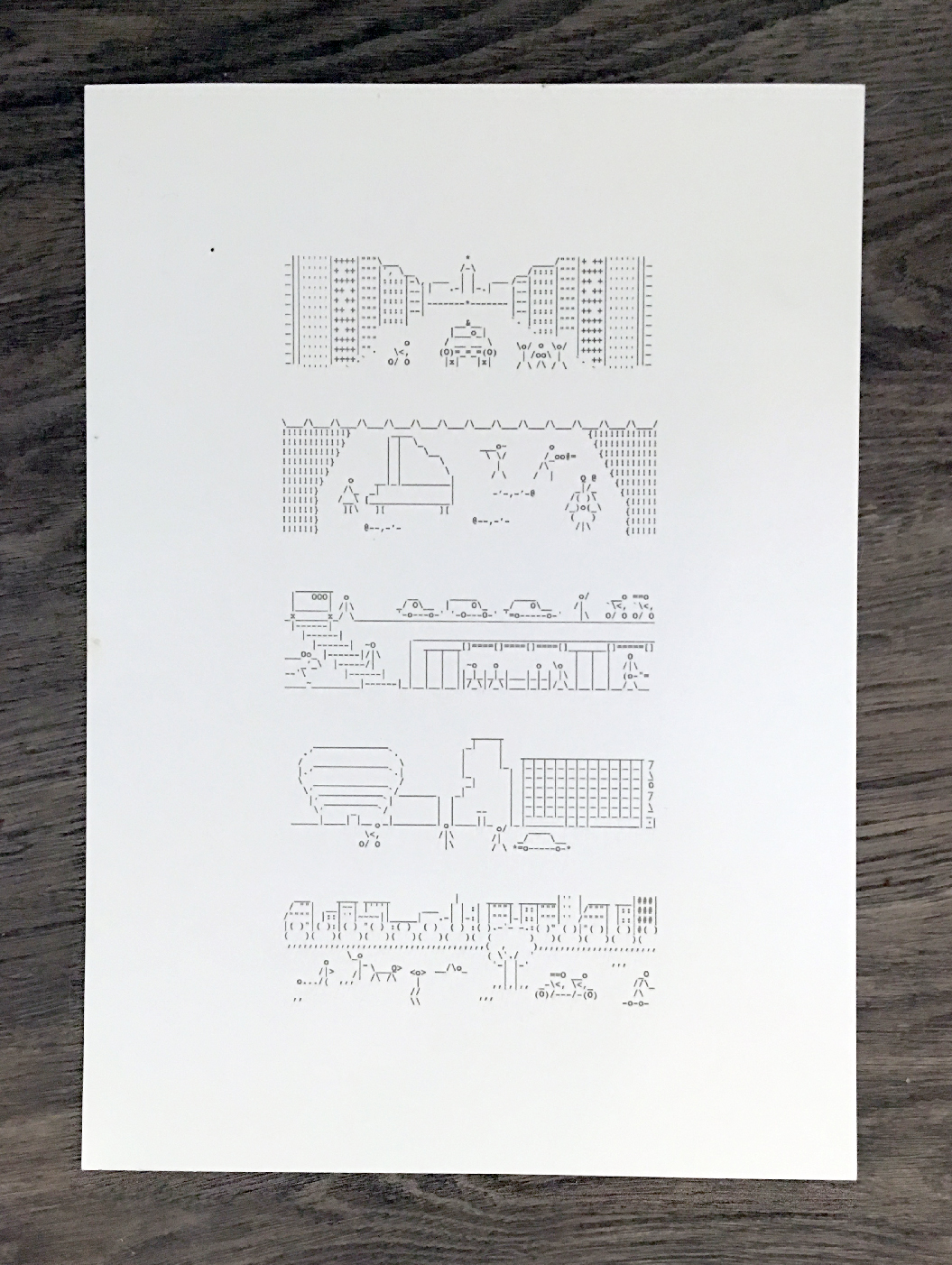 My two visits to New York haven't left me sufficiently expert in the milieu to definitively place each of these scenes, but I can at least describe them vaguely: Hailing a cab, encore on stage at Carnegie Hall, entering a subway station, taking in some art at the Guggenheim, and chilling in Central Park.

How does one end up drawing stickmen for the New Yorker? On Instagram, Jennifer says "Thanks @nblechman for the assignment!" so it may well be the case that Nicholas Blechman was the one with the vision to get ASCII art in the magazine -- and he already knew who from his circle of graphic designers would be the appropriate draftsman to implement that particular whim.

Did she actually draw any of this or has she simply treated textmode archaeological digs as a rich trove of copyright free clip art, curating a feeling of the recent past through cut-and-paste collage? (The New Yorker pieces seem sufficiently bespoke as to have been bespoke creations for that particular gig.)

Will we be seeing further boxology from her in the future or having at long last realized the potential offered on her business cards, will she be conquering a different mountain, moving on to another painstaking anachronistic art work like encaustic wax painting? Only time will tell. But I'll keep my eyes open and keep you posted if anything interesting comes up.

(Sorry if this post seems a bit mean: who does this girl think she is doing original art in my beloved medium, I must prove that the history and nostalgia rightly belongs to me by ripping it apart and exposing her as a fraud. But they say that "extraordinary claims require extraordinary evidence" and a lady drawing ASCII stickmen in 2016, then publishing them in the New Yorker, is an extraordinary circumstance indeed. I had to drill down and uncover whatever there was to uncover.)

Posted by Rowan Lipkovits at 11:42